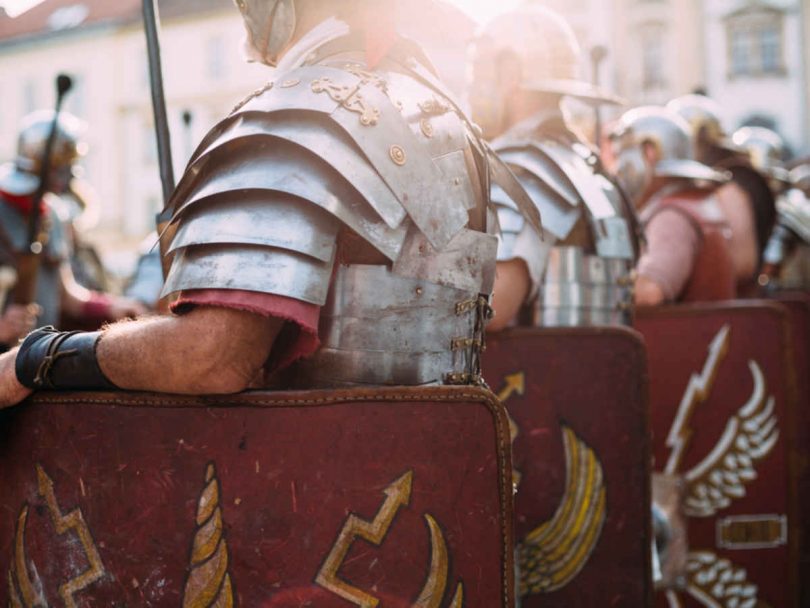 In those days a decree went out from Caesar Augustus that all the world should be registered. – Luke 2:1

The soldiers’ body armor clanked as they walked into the market square at the center of the village. Their helmets and shields reflected the sun as they waited for the gathering crowd. They wore their battle gear not because they were threatened by the peasants, but as a subtle reminder of Rome’s authority over her subjects.

Palestine was a remote outpost of the vast empire, and there was no glory associated with their present assignment. On this tour of the dusty towns of Galilee they were couriers, messenger boys. The ranking soldier reached into his leather pack and pulled out the scroll. He untied the thin leather strap that secured the scroll, and allowed it to unroll without much dramatic flair.

Mary had a quiet smile on her face as she realized how God was going to get her to the place where her baby would be born.

Just as he had done in the last miserable village, just as he would do in the next one, he cleared his throat and read the decree: “By decree of His Excellency Caesar Augustus, all subjects of Rome will be registered.” A murmur rippled through the villagers. They knew that the census was for one purpose—to establish tax rolls. The imperial messenger continued: “Most excellent Quirinius, your benevolent governor, orders all Jewish subjects to report to their ancestral hometowns for registration.”

The murmur grew into a hubbub as the words of the decree were spoken. Life was hard; how could they pay any more taxes? Travel was dangerous and difficult; how could they be expected to make the trip? A few of the more devout citizens said a silent prayer to God to send Messiah soon to rescue them from the oppressors.

Mary was returning from the market stalls with food for the day when she heard the announcement. Her progressing pregnancy made walking more difficult. Now just a few months from the baby’s arrival came word that she and Joseph would have to travel 90 miles to Judea, to Bethlehem for the tax census. Her neighbors were complaining, and she understood their frustration. She held the food basket in one hand and instinctively cradled her growing belly with her other arm as she felt the baby moving inside her. But she had a quiet smile on her face as she realized how God was going to get her to the place where Micah had predicted hundreds of years before that her baby would be born.

Pilgrim, can you think of a way that God might be at work in some unpleasant circumstance you’re facing right now? Can you trust that he is working in it even if you can’t see how? Ask God to give you a faith like Mary had.

Whenever he stands to speak or sits to write, Michael B. McElroy remembers the Apostle Paul's words: "Therefore, having this ministry by the mercy of God, we do not lose heart." After more than 40 years of preaching and teaching the Bible, Mike knows the privilege, opportunity, an any ability he has as a communicator are all gifts of God's grace.